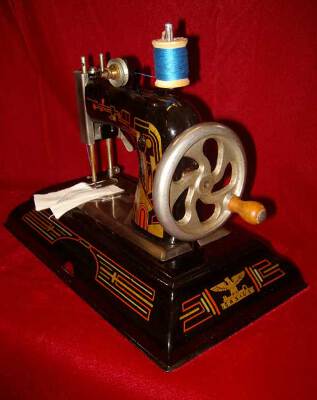 As we will need to know your location, shipping prices will be made available on request - ITEMS WILL ONLY BE SHIPPED BY REGISTERED OR SIGNED FOR POST AND MUST BE INSURED FOR THE VALUE OF THE PURCHASE PRICE.
We will be happy to answer any questions or to supply more photos should you require any
further information PLEASE EMAIL - kympattibears@gmail.com

Casige was one of the great German toy makers of the 20th century although the original company had been founded some 50 years earlier. Specializing in piano locks. The company name comes from a mixture of letters of the founder of the company, Carl Sieper( Carl Sieper of Gevenbroich, Gevelsberg) and his town of Gevelsberg, Westfalen in Germany. Ca--si--ge.

A year after Queen Victoria's death in 1901 Carl Sieper II, the grandson of the original company founder, was asked if he could supply cheap small sewing machines to schools. He had already seen the huge “Muller” toy factory and had a tour. He knew that to expand his company he needed contracts and a lucrative school contract would be a good start into the sewing business.

Carl must have known that he was going to produce sewing machines before 1902 as it is impossible to set up such a business quickly. To change the factory around with the foundry and machining would have taken months if not years.

Casige produced toys from 1902 until 1975. Originally Casige produced locks hence the company trademark of a great German eagle clasping a key said to be the key to their success! The first sewing machine to come off their production lines was the model No 1 in 1902 not the 0 which did not appear until around 1910.