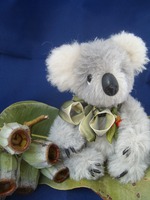 “ABOUT THE DESIGNER”
As a child, growing up in the Barossa Valley in South Australia, Patti Cavenett was inspired by many of the wonderful Children’s stories. She cultivated a vivid imagination and she was mesmerized by the delicate and detailed illustrations produced by the brilliant English Author Beatrix Potter. No doubt those gentle tales and innocent fantasies ignited a lifetime of fervent creativity in Patti. Ideas flowed from the pages of her sketch book in those early years and many years later, what began as an absorbing past-time has blossomed into the full time craft business that became known as “The Treasure House”.  Of course, creativity never really rests. It merely discovers new directions to explore! So it came as no surprise when Patti and Graham, together discovered the magic and artistry of making Teddy Bears and similar Critters and “Kympatti Bears Australia” was born.Since those early days of Teddy Making, literally hundreds of original designs, hand-made Bears and Critters have marched forth from the “Kympatti” Studios to face the world. All created with the love and inspiration nurtured by those tales of long ago.  A major Holiday Season clean up has unearthed those treasures of the past and Patti’s old sketch book was found amongst the long forgotten papers – Now she felt compelled to design the 2010 range and based on those early sketches she has produced the “HILLTOP” range. In a world less gentle than her own childhood, Patti has interpreted some of those memories into Fantasy Critters who will perhaps strike a chord with the creative minds of another generation.
TODAYS QUOTE: - "Sometimes your joy is the source of your smile, but sometimes your smile can be the source of your joy".
- Thich Nhat Hanh.
PLEASE KEEP AN EYE ON THIS PAGE WE WILL BE INTRODUCING MORE NEW ORIGINALS.

EACH will also come with their very own photographic certificate of Authenticity personalized with Patti's own signature.
We will happily GIFT WRAP AND POST TO THAT VERY SPECIAL PERSON
These Bears and Critters do NOT have safety eyes and therefore are not a childrens toy.